Killeigh Ceoltas will have a special float full of music as they will launch their special 23 hour Music Marathon called "Music For Ashling" in the Tullamore St. Patrick's Day Parade.

This is in memory of the late Ashling Murphy who was a noted musician and contributor to Ceoltas events both local and nationally.   A Go Fund Me page will be set up to raise funds for the Offaly Domestic Violence Support Service.

"The Tullamore 2022 Parade preparations are well advanced and it is shaping up to be one of the biggest yet with great interest from community groups, schools, sport clubs and businesses.   Three bands have been confirmed and we are still seeking more.   There is also keen interest from various national groups and they are very welcome in the Parade.   Our theme is "Community Spirit" and we want all groups in Tullamore to get involved" states Cllr Sean O' Brien, Parade Secretary.

The Parade takes place on Thursday 17th March starting at 11.30 a.m.   The Assembly point is the Car Park of the Bridge Centre.   The route is High St., Bridge St., Colmcille St., over the Kilbeggan Bridge and onto Arden Road, with dispersal at the GAA Centre.

Dog owners are very welcome to march with their pets and there will be a special prize for the Best Dressed Dog.   There will also be a Window Display Competition and a special Trophy for the winner.

The Grand Marshall this year is Phil O' Reilly Sr. In recognition of his contribution to sport and business in Tullamore and Offaly.

Businesses are also very welcome to enter a float in the Parade.   We have sent letters to local businesses seeking a contribution to help with the costs in running the Parade; we thank them for their generous support over the years which has ensured that the Parade continues every year. 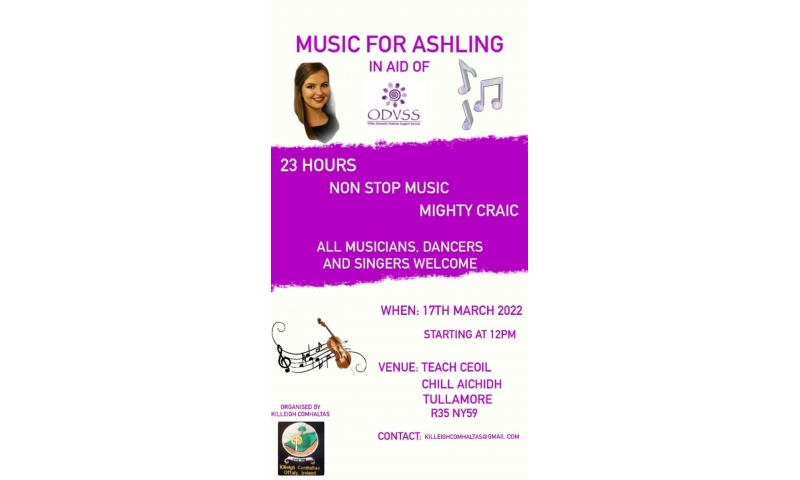